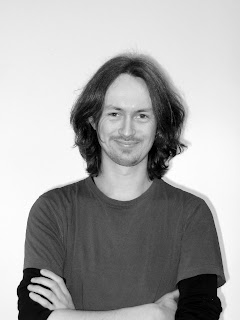 Andy Sykes is an award-winning independent animator, illustrator and self-published author, based in the UK.

Andy works mainly in Flash and produces very personal, 2D, black and white animations, often about his childhood. He produced 3 commissioned films for mobile phones, for the Pocket Shorts scheme, funded by NESTA, in 2005. He has also produced an animated film for Screen Yorkshire, as well as music videos, club visuals and festival idents.

In 2008 Andy created a short animated film with production funding from Screen Yorkshire, called ‘Special Glue and Other Stories’, which he wrote, animated, directed and produced. The film is now being distributed by Shorts International and can also be seen on BBC Big Screens around the UK. Stupid Table, one of the three vignettes in the film, won Best Short Short at Bradford Animation Festival in November 2009. ‘Special Glue and Other Stories’ premiered at the 6th London Short Film Festival in January 2009. It has since been screened at the East End Film Festival, London, in April 2009, FEST – International Film Festival Portugal, Espinho Portugal, in June 2009, London International Animation Festival, in Sept 2009, Flip Animation Festival, Nov 2009 and Animated Exeter in Feb 2010.

Andy’s films have been shown on BBC2, Channel M, Chew TV and the Community Channel, along with festivals worldwide.

His Pocket Shorts films won awards at Dublin’s Darklight Festival and Texas’ DCI Mobile Content Fest. His film ‘Evil Fun With Zimmy‘ was shortlisted for Noise Festival in 2006, being screened at Urbis and the ICA in London.

As well as animation, Andy self-published, ‘The Hexjibber Colouring and Activity Book’ in 2006, which is now available on Amazon and independent bookshops across the UK. You can see the animated advert Andy produced for the book here. In 2007 he organized a giant interactive colouring-in event in a shopping centre, for Leeds’ pioneering cultural event, Light Night, organized by Leeds City Council. In 2009, Andy returned to Light Night with an Interactive Animation, made on the fly, using drawings submitted by the public, using an infra-red spray can and the BBC Big Screen.

In 2009, Andy produced a series of illustrations for an interactive, site specific game, using innovative mobile phone technology, based at the BBC’s White City site, called Five Trees Forest. The project won the award for best use of mobile technology at 2009’s Yorkshire Digital Awards sponsored by 4iP.

From May – October 2008 Andy ran the former Channel 4 ‘AIR’ booth at the National Media Museum in Bradford, promoting independent animators in the region. During the pilot phase of the scheme (May – Oct 2008), four films were made. The films were screened at 2008’s Bradford Animation Festival in November, which Andy also created the animated ident and logo for, with Rozi Fuller.

If you want to contact Andy about his work, commissions, or anything else, he welcomes mail at pjboysyko@yahoo.co.uk

If you like Andy’s work, please consider visiting his online store.

The Hexjibber Colouring and Activity Book, by Andy Sykes is available:

It is 80 pages of colouring-in fun for adults and kids alike, including “Colour in the Emo”, “Rebrand the Earth” and “Find the Lunchbox Items in the Destroyed City”! Check out the videos below to find out more.